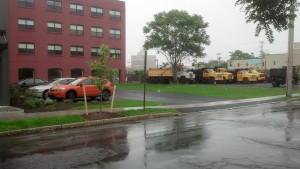 The Salt Quarters project, located at 109-115 Otisco Street, is part of a revitalization program of the Near Westside of Syracuse initiated by the Near West Side Initiative. The NWSI acquired the space for the development of an art studio, art galleries, and residential apartments. Along with the numerous site improvements taking place, the NWSI incorporated green infrastructure in their renovation process.

The project transformed what used to be a gravel/pavement lot to a new parking area consisting of 2,943 square feet of porous pavement, a 261 square foot rain garden and 11,128 square feet of added green space. The green infrastructure techniques capture runoff from approximately 17,420 square feet and will reduce stormwater runoff by an estimated 306,500 gallons annually.