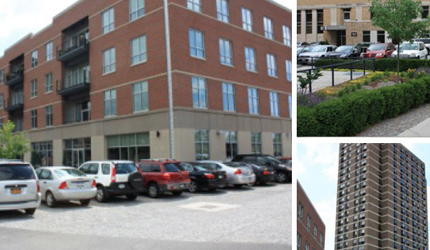 The project at Jefferson Clinton Commons was completed in 2010 and converted approximately 17,000 square feet of impervious surface and roof areas of the property located near the intersection of West Jefferson and South Clinton Streets. The project transformed an existing 15,000 square feet of asphalt parking lot into a porous pavement lot that features the use of porous concrete, structural soils and subsurface infiltration to capture stormwater runoff.
Additionally, 2,000 square feet of impervious area was converted utilizing a roof garden application to capture stormwater. Various landscaping features were added to the front of the building to capture additional stormwater and remove it from the combined sewer system.

The project was designed to capture a total estimated annual stormwater runoff of 299,000 gallons.